In just the last couple of years, something fundamental has changed in the Computer Industry. Technology agendas and innovation are no longer being driven by businesses – for the first time, it is consumer demand that is setting the pace and the way we do business – the era of “Consumer IT” is upon us.The roots of this change can be traced back to, first 2005 with the explosion of social media networks, and then in 2007 with the arrival of the Apple iPhone. Its revolutionary touch-screen and intuitive user interface turned the world of applications development on its head. Not satisfied with that, Apple then revolutionised application delivery with its Cloud-based AppStore, which set the ball rolling for the explosion in mobile computing phenomenon we see today. The ecosystem that grew from the AppStore fueled the exodus of developer talent away from the PC towards browsers, Smartphones and tablets. Meanwhile, those social networks were incubating communities and special interest groups of hundreds of millions of users’, each sharing personal information, opinions and ideas. They used browsers paying little attention to the mobile user experience. Then business realised these communities were talking about them – sharing experience, advice and influencing sales – not always in a positive manner. Business started listening to feedback and prioritised their social network image. At first they ran marketing campaigns and then tightly integrated business processes – the term “social media” was born. As mobile adoption grew, so brands like Facebook, Twitter, and Linked-in were forced by Wall Street to upgrade their mobile presence and user experience with dedicated “native” implementations of their service. Having a native mobile experience became a board room discussion that affected market caps and so ignited the debate between “native” and “browser” user experiences.

If it was the iPhone that drove IT into the hands of consumers, it was the iPad that drove the mobile experience into the workplace. Employees preferred using their own tablets at work over their PCs. This “Bring Your Own Device” (BYOD) practice forced IT departments to embrace tablets and Smartphones as an integral part of their strategy. Mobile computing became a “Top 3” CIO priority and quickly the BYOD phenomena turned to Choose Your Own Device (CYOD) as employers offered mobile devices to employees to maintain some level of control. Genero’s core value is to enable developers to evolve and keep pace with technology trends, so supporting this movement was just a natural extension of what it already offered. Already present in mobile computing through its HTML5 based Genero Web Client, it decided to augment Genero with a true, native implementation enabling on-line and off-line applications. Genero Mobile is the fruit of 20 years experience working with developers of mission-critical, data-centric applications. 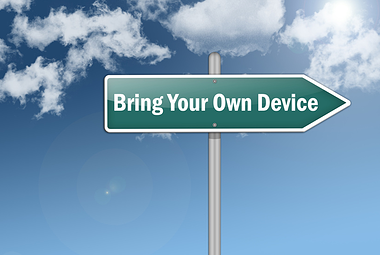 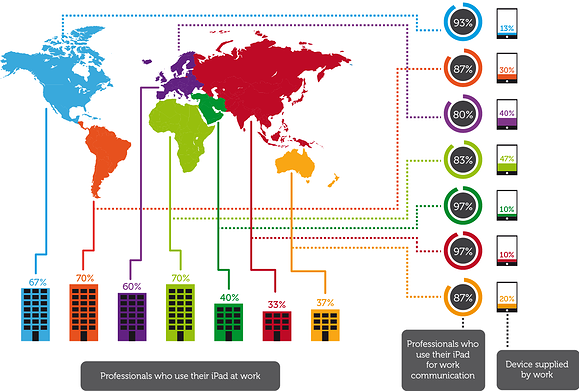 iPad use at work.

The start of the revolution

In the West, the majority of iPad owners take their personal iPad to work as illustrated in this IDC report. Until recently, they mostly used them for email and presentations and surfing the Web. Microsoft’s launch of Office for iPad brought new value to the iPad in the workplace and it quickly penetrated the enterprise with over 12 million downloads on its first day. As mobile enterprise apps grow, expect the tablet to become the staple diet of workers in the years to come. Tablets will gradually evolve from “content consultation” to “content creation” devices. More practical and intuitive in their use, tablets will become the de facto workstation in the next 5 to 10 years. 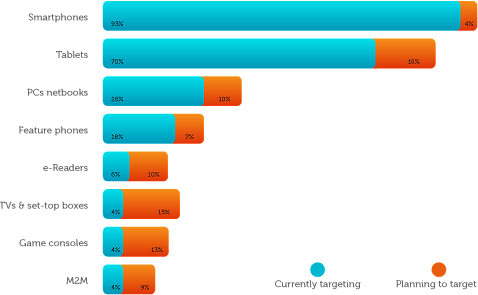 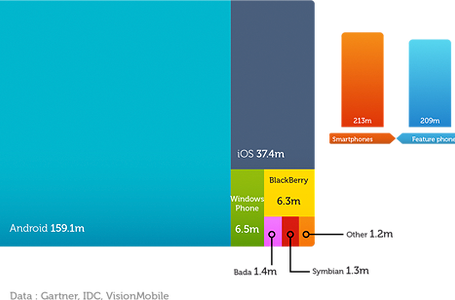 Apple’s iOS and Google’s Android represent over 90% of all Smartphone shipments, fueling claims that the platform land-grab has already ended.

Both Android (Samsung with its Fort Knox) and Apple with Touch ID and other intiatives are working hard to ensure their devices meet stringent security needs of the enterprise and government as they find their way into a new breed of apps.

Naturally platform priorities are not one-size-fits-all. There are very clear trends emerging in developers prioritisation of iOS vs Android, based on audience targeted, developer experience, and app category. The audience targeted (B2C vs B2B apps) has a significant impact on the primary platform selected.

Looking at the consumer vs. enterprise app market, while iOS and Android are equally important to developers in the consumer segment, developers targeting enterprises have a stronger preference today towards iOS. 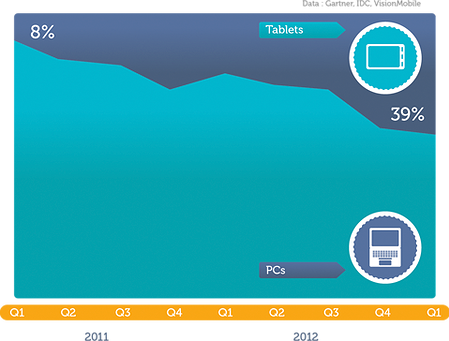 In Q1 2013, PC shipments experienced a sharp slump ending a two year period of a stalled, but relatively stable PC market. This has allowed tablets to claim an even larger share of the combined PC-tablet market, now accounting for over 39% of total devices sold. 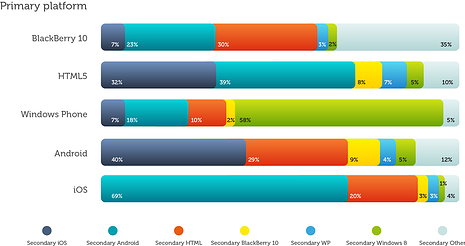 Where the effort gets spent

78% of developers use at least one secondary platform concurrently with their primary one. Which platform do iOS, Android, WP, BB10 and HTML5 (mobile) developers use as a second preference?

The picture is different for Android developers, who use iOS as a second platform (40%), just ahead of HTML5 mobile (29%).

Prior to Genero Mobile, mobile apps were either exclusively native or cross-platform, following one of these three architectures:

2. HTML5 using standard web technologies such as JavaScript. But this approach has its limitations, namely, proprietary device APIs are not exposed to the HTML5 web standard. This means there is no access to the camera, GPS, storage, calendars for instance from within the HTML5 code. Difficult to innovate in this scenario. Plus most apps need a network connection to operate, which is not always guaranteed.

3. HYBRID delivers the best of both worlds. Developers can code in HTML5 and Java Script within a web view wrapper that gives them access to the device’s peripheral and native APIs. 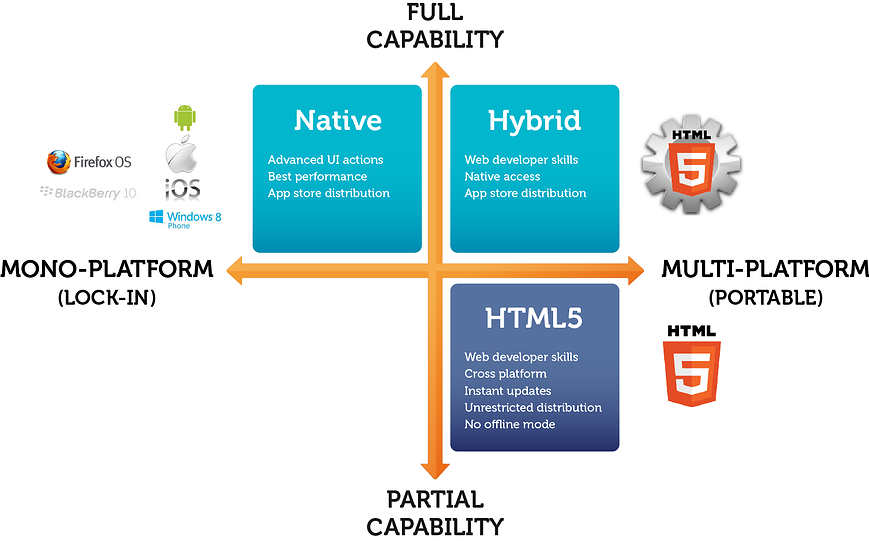